Tech Giants are disrupting Autonomous Driving with their expertise in AI and Software which are critical for Autonomous Driving. Learn about the capabilities of the 10 biggest Tech companies and their outlook: Alibaba, Amazon, Apple, Baidu, Huawei, Intel, Microsoft, Samsung, Sony and Tencent.

The world's biggest Tech Companies, including Amazon, Apple and Microsoft, together with Chinese Majors Alibaba, Baidu, Huawei and others, are expanding their presence in the automotive industry to monetize the capability gap of existing Tier-1s in Software, AI, and data needed for Autonomous Mobility. They are also supporting the digitalization transformation of major carmakers and suppliers.

As the value creation in Mobility shifts from hardware to software, this expansion threatens major Tier-1 Suppliers Bosch, Continental and others, who still maintain the lion's share in the radars and cameras for ADAS, but need to transform quickly to the needs of Autonomous Mobility to maintain their position in the market.

This report examines the capabilities of the 10 biggest Tech Companies in Autonomous Driving and their potential to capture share in rising new business models in Autonomous Mobility.

Read our report to understand how the products and services of Tech Companies and their outlook in the Autonomous Driving market.

To learn about the outlook of today's major Tier-1 Suppliers of ADAS, including Bosch, Continental, Valeo and others, read our report: ‘ADAS Suppliers Rankings & Market Shares’. 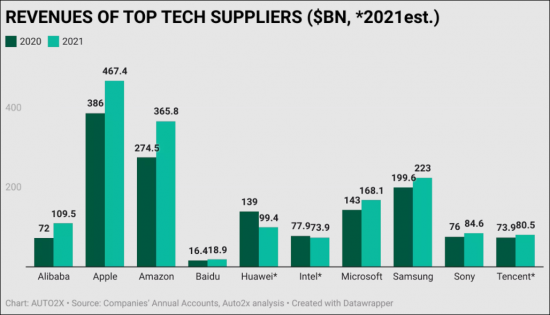 We identify a number of opportunities for Tech Companies to enter or disrupt the existing supply chain.