This report provides a comprehensive picture of the kitchen furniture industry in China , enhanced by historical trends on production, consumption and international trade, analysis of the production and distribution systems and information on major players. The study also includes forecasts of the real growth of the market for the years 2020 and 2025 . The research was carried out via direct interviews with Chinese and international kitchen furniture manufacturers operating in China.

Kitchen furniture exports and imports are broken down by country and by geographical region of origin/destination. Historical data are provided for the time frame 2016-2021. A similar analysis was conducted for the international trade of a list of selected appliances (refrigerator and freezers, cooking appliances, clothes washers and driers, dishwashing machines, hoods) relevant for the kitchen industry for the period 2016-2021.

The chapter on the distribution system offers an analysis of the major sales channels (contract/building trade, kitchen specialists, furniture shops, furniture chains, and DIY) for kitchen and their 2014-2019 trends, including a list of the main kitchen furniture retailers in the major Chinese provinces and short profiles of the leading furniture chains. Reference prices for kitchen furniture and the weight of built-in appliances on the value of the kitchen market are also considered. The analysis also includes the profiles of 22 Chinese cities , which include economic and demographic statistics, kitchen demands, an indicator that ranks the cities according to their business attractiveness, and the analysis of the commercial areas of each city through the geolocation of over 65 brands.

A list of more than 60 major players in the kitchen furniture industry in China is also included. 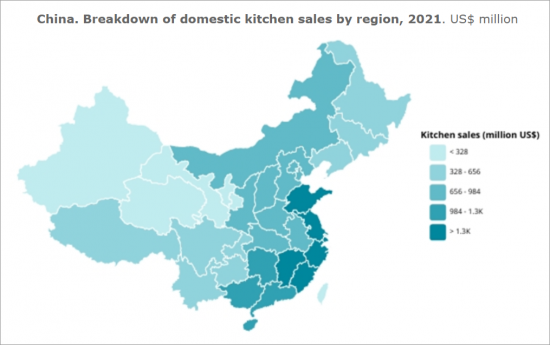 In 2021, kitchen production in China reached a value of US$ 8,757 million (RMB 56,489 million), registering an annual growth of +24.5% in US$ (+16.3% in RMB). Approximately 4.1 million kitchen sets were produced by Chinese kitchen furniture firms, of which around 280 thousand were addressed to exports and almost 3.9 million to the domestic market. Most of the production of kitchen furniture is managed by the top 50 players, which accounts for almost 75% of its total value. In fact, over the last few years, the industry has undergone a process of consolidation, including several IPO and M&A. Oppein confirmed as the largest player.

European players hold 30% of the upper-end market, and a huge 80% of the luxury market.

Annex I: Architects and Interior Designers

The European Market for Kitchen Furniture