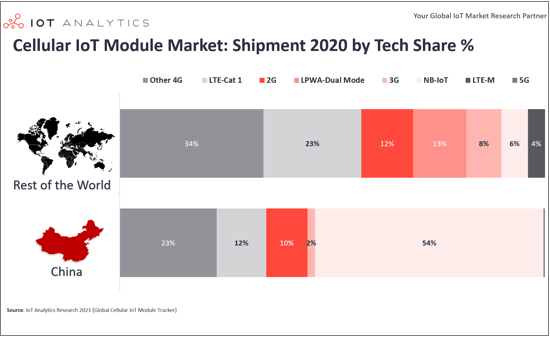 As part of IoT Analytics' expanding market coverage of IoT markets, IoT Analytics this month launched an in-depth cellular IoT module market tracker that provides a quarterly look at the revenues and shipments of 33 companies providing cellular connectivity hardware modules for IoT deployments. With 4.5 billion cellular IoT connections expected by 2025, the market for cellular IoT modules is in a long-term cyclical uptrend (which was disrupted in 2020 by COVID-19). Every connected device that makes use of a cellular connection (e.g., 2G, 3G, 4G, or 5G) uses either a cellular IoT module or a cellular chipset embedded directly into the printed circuit board of a device or a piece of equipment. The promise of pre-configured IoT modules has become increasingly attractive in recent years, as customers are looking to decrease time-to-market for IoT solutions and multi-connectivity setups have made it more complicated for companies to develop their own solutions.

The reason the Chinese market expanded while other markets contracted is simple. Many IoT initiatives were halted or, in some cases, cancelled in 2020 due to COVID-19. IoT initiatives in China, however, were much less affected and continued as planned after a short COVID-19 lockdown.

One of the exciting trends that has emerged from the research is that the connectivity picture in China is quite different than in the rest of the world.

In recent years, NB-IoT has become the new alternative for 2G IoT applications in China. NB-IoT thus became the licenced LPWA technology of choice in China. However, the absence of LTE-M in China and technical limitations within NB-IoT have led to a rise in demand for a new segment: low-cost LTE-Cat 1 bis modules. Cat 1 bis, which is based on the 3rd Generation Partnership Project's (3GPP) Release 13, is characterized by a single antenna and is optimized for low-power applications. This is in contrast to the LTE-Cat 1 standard adopted in North America, which is defined by 3GPP's Release 8 and is supported by two receive (Rx) antennas. 3GPP's Release 8 LTE-Cat 1 is based on Intel and Qualcomm chipsets, whereas 3GPP's Release 13 LTE-Cat 1 bis is driven by UNISOC 8910DM.The Release 8 LTE-Cat 1 modules cost, on average, $10 more than the Release 13 LTE-Cat 1 modules. 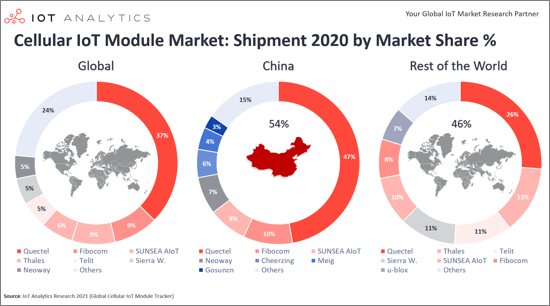 In contrast to five years ago, the cellular IoT module market today is dominated by Chinese providers. Quectel, Fibocom, and SUNSEA AIoT have established themselves as market leaders, and the market expansion in China during 2020 has increased their market position (although 2020 growth rates among Chinese players are quite different).

Quectel's revenue from cellular IoT modules grew 44% YoY in 2020 due to an increase in LTE-series and LPWA module shipments. In addition, a significant increase was reported in the company's embedded automotive segment, which served more than 60 Tier I suppliers and more than 30 vehicle original equipment manufacturers (OEMs). Fibocom's revenue from cellular IoT modules grew at a similar rate in 2020 due to increased LTE-Cat 1 bis and NB-IoT module shipments. In response to customer demand, Fibocom increased its IoT module production by 65% YoY in 2020.

Revenues declined for all European and North American providers in 2020. Thales' decline was due to the adverse impact of COVID-19 on the automotive and point-of-sale sectors. Telit's revenue decline was partially explained by the downturn in the deployment of smart meters for water and electricity in Asia-Pacific. Sierra Wireless's revenue declined due to the divestiture of its automotive-embedded module product line to Rolling Wireless, a consortium led by Fibocom Wireless Inc., and lower sales of mobile computing and networking modules caused by the design losses of two higher-margin computing module customers. Tight component supply in late Q3 and Q4 2020 was also a factor.

According to IoT Analytics data, the global chip shortage had already affected some cellular module companies in Q4 2020. Most cellular module companies have a large backlog of orders in hand, and chip shortages have led to higher chip price volatility. Hence, in 1H 2021, we expect a global decline in shipment volume for the overall cellular IoT module market and a decrease in profit margins for module makers. The chip shortage is therefore hampering the COVID-19 cellular IoT recovery in Europe and North America. Markets there are not expected to grow as much as they could.

The Chinese adoption of LTE-Cat 1 bis is starting to also gain traction in Europe. Since the alternative, LTE-M, is still fragmented and is not available on a multi-country scale across all of Europe, LTE-Cat 1 bis is emerging as a viable alternative. LTE-Cat 1 in general comes with the benefit that it does not require software and hardware upgrades for the base station, so there are no additional network coverage costs.

Are you interested in learning more about the cellular IoT module market?

The “ Global Cellular IoT Module Tracker 2021” provides a holistic view and includes technological and regional deep dives into the global cellular IoT module market. It also contains detailed market sizing by region, technology, and 33 key companies. The tracker is based on publicly available information and IoT Analytics intelligence gathered from companies active in the market via telephone interviews and personal meetings at business events during the last three years.

This tracker provides answers to the following questions (among others):