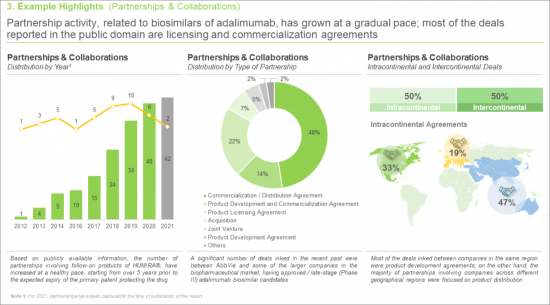 Adalimumab was the first fully humanized, monoclonal antibody drug to be approved by the US FDA in 2002. The product was subsequently launched in 2003, and initially only indicated for the treatment of rheumatoid arthritis. In the succeeding years since its launch, HUMIRA® gradually approved for the treatment of psoriatic arthritis (2005), ankylosing spondylitis (2006), Crohn's disease (2007), plaque psoriasis (2008), ulcerative colitis (2012), hidradenitis suppurativa (2015), among a few other indications. Most recently, the drug was approved by the FDA to treat pediatric patients with moderately to severely active ulcerative colitis (2021). Considering the sheer number of indications that it is eligible to treat and being the first of its kind, it did not take long for HUMIRA® to achieve blockbuster status; Abbott Laboratories reported worldwide sales worth USD 1.4 billion for the product in 2005. HUMIRA®'s performance in the market peaked in 2018, reaching USD 19.9 billion in revenues from product sales. However, since the official launch of the first biosimilars in Europe in the same year, the market share of the originator product has been declining, albeit rather slowly.

With a relatively large intellectual property portfolio and an aggressive legal strategy, AbbVie has been very successful in impeding the entry of adalimumab in the global marketplace. The primary patent covering HUMIRA® was set to expire in 2018; however, leveraging its first to market advantage, AbbVie made extensive efforts, dedicating considerable resources to patent novel uses, features, indications and methods of manufacturing, related to the product. Now, the company has marketing exclusivity till 2034. Since many biosimilars of the drug have already been developed (and launched in various well-regulated and poorly regulated regions, with / without having to reaching a settlement with AbbVie), the company recently concluded several ongoing litigations, regarding product launch, enabling certain developers to launch their respective follow-on products by entering into individual licensing agreements. Regarding the launch of biosimilars, experts consider HUMIRA® to be an exception to the norm; there are many other biologics that have lost patent protection and marketing exclusivity in due time, and now have biosimilar versions in the market. However, given the lucrative opportunity associate with this product, its corresponding biosimilar developer landscape is also vast. In future (after 2023), when multiple enemy products enter the market, the adalimumab biosimilars market is anticipated to witness a sharp spike, in terms of revenues from product sales.

Scope of the Report

The "Adalimumab Biosimilars: Focus on Approved & Launched Biosimilars, Investigational & Research Use Biosimilars, Inactive / Terminated / Withdrawn Biosimilars, Industry / Non-Industry Partnerships" report features an extensive study of the current developer landscape and clinical research scenario related to all the follow-on products of the blockbuster biologic drug, HUMIRA®, which are either available or under development. The information in this report has been presented across two deliverables, namely an Excel sheet, featuring an interactive dashboard, and a PowerPoint presentation, summarizing the ongoing activity in this domain, and key insights drawn from the available data. The report features the following details: