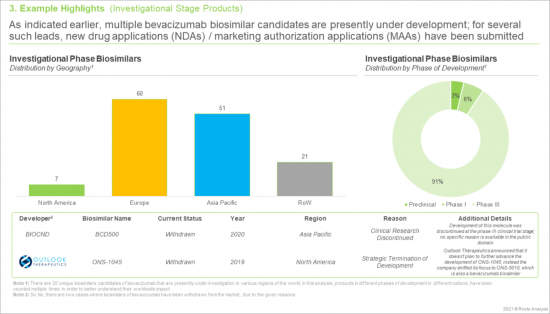 Avastin® (bevacizumab) is VEGF-A targeting, humanized monoclonal antibody-based therapeutic developed by Genentech and Roche. It was the first angiogenesis inhibitor drug to be approved by the US FDA. Avastin® was first approved for treatment of advanced colon cancer (2004); since then, the drug has been approved for advanced lung cancers (2006), metastatic breast cancers (2008), kidney cancers and brain (glioblastoma) cancers (2009). Presently, it is considered an important standard of care in oncology. It is worth mentioning that since the establishment of the immune modulatory roles of VEGF, bevacizumab was identified as a viable component of potential combination therapies, particularly with immune checkpoint inhibitors. Therefore, based on the type of cancer that it is being used to treat, Avastin® may or may not be used in combination with conventional chemotherapy drugs. It is worth mentioning that for treating women with metastatic breast cancers, bevacizumab was approved under the FDA's accelerated approval program - according to which, a therapeutic may receive the green flag for being used to treat a particular disease indication based on the results of past clinical trials. However, in 2010, the FDA issued a statement proposing that Avastin® no longer be used to treat women with metastatic breast cancer, taking into consideration the fact that there was insufficient evidence that the drug is safe and effective for use in this particular indication. In November 2011, the regulator reached a decision and the metastatic breast cancer was withdrawn as an indication for bevacizumab, on account of the drug not being safe and effective for treating the same. Considering the opportunity associated with anticancer therapeutics, the Avastin® biosimilars developer landscape is substantial, and characterized by the presence of multiple big pharma players, such as Abbott Laboratories (Bevacizab™), Amgen (Mvasi®) and Pfizer (Zirabev™). Considering that several enemy products are already in the market, and several others are under development, the bevacizumab biosimilars market is anticipated to witness noteworthy growth in the foreseen future.

Scope of the Report:

The "Avastin® (Bevacizumab) Biosimilars: Focus on Approved & Launched Biosimilars, Investigational & Research Use Biosimilars, Inactive / Terminated / Withdrawn Biosimilars, Industry / Non-Industry Partnerships" report features an extensive study of the current developer landscape and clinical research scenario related to all the follow-on products of the blockbuster biologic drug, Avastin®, which are either available or under development. The information in this report has been presented across two deliverables, namely an Excel sheet, featuring an interactive dashboard, and a PowerPoint presentation, summarizing the ongoing activity in this domain, and key insights drawn from the available data. The report features the following details:

The following companies and organizations have been mentioned in the report.