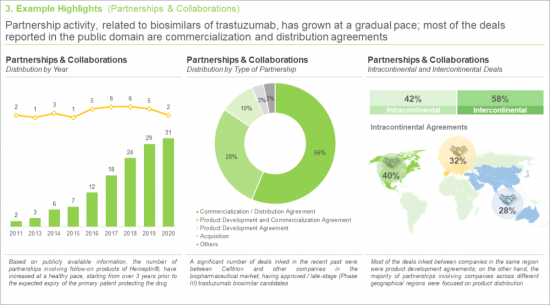 The HER2 receptor is a well characterized biomarker that is overexpressed in a number of types of cancer cells, including 25% to 30% of breast cancers. Trastuzumab, a humanized monoclonal antibody, was designed to bind to the extracellular domain of HER2, and thereby, inhibit the proliferation of tumor cells that overexpress this particular antigen. It was discovered and developed by scientists at Genentech (a fully own subsidiary of Roche) , in collaboration with the University of California, Los Angeles; the first clinical trial of the drug was initiated in 1992. In 1998, it was approved after being fast tracked by the FDA; it was marketed under the brand name Herceptin®. Over time, studies have demonstrated that intravenously administered trastuzumab is an effective single-agent immunotherapeutic intervention against a variety of cancers. Moreover, in combination with certain other chemotherapies (such as paclitaxel), the drug has been shown to significantly improve the median time to disease progression and survival time in patients suffering from metastatic breast cancer (characterized by the overexpression of the HER2 receptor) . It is worth mentioning that trastuzumab is also available in three different forms, namely trastuzumab and hyaluronidase-oysk, pertuzumab, trastuzumab, and hyaluronidase-zzxf, and ado-trastuzumab emtansine (an antibody drug conjugate). Considering the opportunity associated with this product, its corresponding biosimilar developer landscape is also vast. With multiple enemy products already in the market, and several others under development, the trastuzumab biosimilars market is anticipated to witness noteworthy growth in the short-mid term.

Scope of the Report:

The "Herceptin® (Trastuzumab) Biosimilars: Focus on Approved & Launched Biosimilars, Investigational & Research Use Biosimilars, Inactive / Terminated / Withdrawn Biosimilars, Industry / Non-Industry Partnerships" report features an extensive study of the current developer landscape and clinical research scenario related to all the follow-on products of the blockbuster biologic drug, Herceptin®, which are either available or under development. The information in this report has been presented across two deliverables, namely an Excel sheet, featuring an interactive dashboard, and a PowerPoint presentation, summarizing the ongoing activity in this domain, and key insights drawn from the available data. The report features the following details: