SEARCH
What are you looking for?
Need help finding what you are looking for? Contact Us
Compare
Free Samples
Home Market Research Reports Automotive

Read this report to understand Continental's outlook in Autonomous Driving

This report examines Continental's strategy execution, technology capability and market leadership in ADAS & Autonomous Driving to provide a competitive assessment of their readiness level against other major ADAS Suppliers.

Learn about the capabilities of Continental's portfolio of sensors and features and their roadmap to support Level 3 and Level 4 features in passenger cars and autonomous mobility services.

Level 3 and L4 require augmented sensing capabilities thus additional front sensors are expected to become part of the ADAS sensor set to enhance robustness. Lidar and/or high-definition radars are expected to become the norm for this, as Audi A8's lidar above, but not everybody is going this direction. For example, Tesla's HW for the Enhanced Autopilot, which claims L3-4 capability does not include a lidar. The figures below present a representative (but not exclusive) set of building blocks, i.e., supporting ADAS driving and parking features, to enable higher levels of autonomy. Another key component for these feature roadmaps is the required sensor set for each level of automation presented below.

Tesla and Mercedes-Benz have been vocal about their advanced AD technology and follow more aggressive marketing strategies in an attempt to establish themselves in the forefront of AD on customers' perception. Tesla's naming strategy for the L1-2 Autopilot and the less restrictive hands-on-wheel has received criticism from the industry and regulators alike.

Germany's KBA has recently banned the term Autopilot as misleading, i.e. because it creates a false sense of security given that the term "Pilot" is more accurate for L3. With regards to Mercedes-Benz, its advertisement for the E-Class described it as self-driving caused controversy and eventually had to be taken down. However, following the May'16 Tesla fatality, many automakers have been more cautious on advertising their AD capabilities, e.g. Volvo's Pilot Assist.

Continental is making advancements in the required technologies to support Level 4 Autonomous Driving, i.e. new sensors with better performance in range, FoV and other specifications, cheaper and more efficient systems and new platforms.

Regarding the Sensing building block, which includes building a robust sensor set to capture the vehicle's environment, Continental is working on next-generation 4D imaging radars, satellite cameras and high-performance lidars.

Among other functions or features for L3-4, Continental is developing a "Driving Planner", a software that performs complex driving manoeuvres autonomously for Level 3 autonomous driving for speeds up to 130 km/h. The company expects to reach series production by 2024.

Finally, Continental is bringing its experience in System integration, function development, motion control, simulation, and validation to the Consortium owned by BMW and Mobileye that develops software and hardware platforms for L3-5 Autonomous Driving.

Until 2020, Continental's Advanced Driver Assistance Systems Business Unit was part of the company's Chassis & Safety Division (along with Vehicle dynamics, Hydraulic Brake Systems, and Passive Safety and Sensorics). A new structure started in Jan'20 with the Chassis & Safety division transforming to the Autonomous Mobility & Safety (AMS) under the Automotive Technologies Group.

AMS recorded sales of €7.5 million in 2020. From 2022, Automotive will include Autonomous Mobility, Safety and Motion and VNI.

To assess the market shares of each ADAS Supplier, we have considered the sensor portfolio of each Supplier and the ADAS supply chain by radar, camera, and lidar for 212 models.

170 models equipped with at least one Level 1-Driving system (e.g. ACC, AEB or LDW) and 42 models fitted with a Level 2-Driving system (Traffic Jam Assist / Cruise Assist) as part of the optional and standard equipment (since take rates are not available).

Continental is in a unique position to monetize growth in ADAS by utilizing: 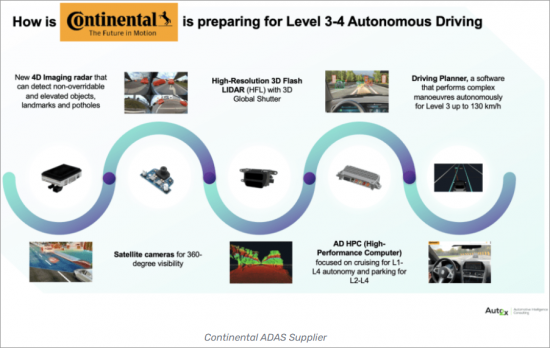 Continental says their supercomputer can reduce the development time for ADAS and Autonomous Driving from a few weeks to a few hours. Continental's supercomputer has already found applications in VW's ID.3.

In 2022, Continental received the first-series order for Vehicle High-Performance Computer In China. The company has won 2 customers in AD HPC for SOP 2022 in Japan and 2023 in Germany.