SEARCH
What are you looking for?
Need help finding what you are looking for? Contact Us
Compare
Free Samples
Home Market Research Reports Telecom & IT

110-page adoption report on the “IoT communication protocols landscape” including statistics on:

The “IoT Communication Protocols Adoption Report 2022” is part of IoT Analytics' ongoing coverage of IoT hardware and connectivity. The information presented in this report is based on extensive research and an extensive survey of n=200 communication protocol users and decision-makers in manufacturing, healthcare, retail, and other industries.

The purpose of this document is to inform interested parties of the state of the IoT communication protocols landscape through the IoT Analytics research lens.

Questions answered in this report:

Communication protocols: A set of rules that enables the effective communication (i.e., data exchange) of different machines/devices in a network setting. <>The concept is similar to the languages we use to communicate. If two people do not speak the same language, the exchange between them is not going to be effective. 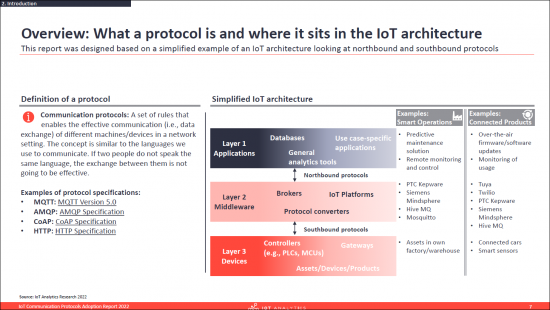 This report includes statistics on the adoption of communication protocols between devices and middleware as well as middleware and applications.

An extensive analysis shows which departments are the decision makers when it comes to a new communication protocol. The results include segmentation by region, industry, and company size.

The report presents the most important features a communication protocol needs to have to be selected as part of a connectivity setup.

The results for the most used tool for collecting, normalizing, and contextualizing data as part of the connectivity setup are presented in this adoption report.

IoT Analytics includes 23 deep dives on communication protocols, including usage and installation statistics in this report.